Voices of Wildlife in NH

The New Scientist magazine wrote, “Cursed with a reputation for destruction, the beaver’s tale is an unhappy one. But we are finally seeing an eco-saint where once we saw a sinner.”

Beavers are being welcomed in states with serious drought problems because of the beaver ponds mitigating effects on drought, from the Santa Cruz Sentinel.  http://www.santacruzsentinel.com/article/NE/20141220/NEWS/141229981

NH has just gone through one of its worse droughts ever, with more predicted. Drought impacts to NH (2)   DES Drought info and links (1)

In lieu of an abstract, here is a brief excerpt of the content:

The Shaker Trace Wetlands is a restored wetland area in southwestern Ohio (Klein 1992). Several years ago, a small number of American beavers (Castor canadensis) took up residence in an ephemeral lake in the wetlands. These beavers cut down willows (Salix spp.)—thus allowing more light to reach other vegetation—built a lodge, and dug an extensive system of canals (Figure 1). There is no stream flowing into the lake, so no dam. In some places, this lake can be over 1 m deep during the spring and early summer, but by late summer it may dry up completely owing to normal dry conditions. During the driest periods the canals dug by beavers provided an important reservoir of water for amphibians, fingernail clams, snails, and other aquatic organisms (Figure 1). During canal excavation, the beavers churned the soil and exposed seeds from deeper in the soil seed bank. In addition to these ecological benefits, the beavers provided wildlife viewing opportunities for visitors to the wetlands. After a couple of years in this ephemeral lake, the beavers abandoned their lodge and moved on, probably to a river or pond less likely to dry up.

Within a couple of years of the beavers’ departure, the extensive growth of willows and other woody vegetation made mechanical removal with a Hydro-Axe machine necessary (Conover and Klein 2010). This operation opened extensive areas to more light, and the large tires of the Hydro-Axe machine left deep tracks in some areas. Churning the soil exposed seeds from deeper in the soil seed bank. The Hydro-Axe operation served to increase plant diversity in the wetlands and provided more habitats for herbaceous species. The tire track depressions hold water during the summer drought period longer than surrounding areas, giving larval amphibians more time to develop into adults. [End Page 212] Snails, fingernail clams, and other aquatic species also benefit from water held in these depressions. In other words, the Hydro-Axe operation provided services at a cost of about $5,000 for 20 ha—services that had been provided for free by the beaver colony before they moved on. 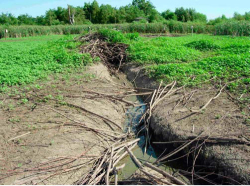 Beavers as ecological engineers can provide beneficial ecological services. A canal (above) dug in an ephemeral lake in Shaker Trace Wetlands in Ohio leads to the beaver lodge. A wildlife viewing shelter can be seen in the background. The canal retained water longer into the drought period, allowing tadpoles to survive (below) when other areas were already dry. 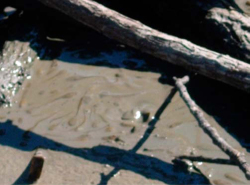 Beavers were extirpated from Ohio by 1830 (Chapman 1949) but have been making a comeback during the last few decades. In some parts of the country, beavers have been reintroduced and have provided rapid improvements in hydrology, riparian vegetation, and wildlife habitat (e.g., Albert and Trimble 2000). In restored ephemeral wetlands similar to the Shaker Trace Wetlands, beavers can play a keystone role by cutting down woody vegetation and digging canals that hold water for longer periods into the dry season, and by churning the soil, exposing seeds buried deeper in the soil seed bank. Beavers could be encouraged to remain in such wetlands by scooping out some deeper pools. This would benefit aquatic organisms by holding more water longer into the drought period, and it might enable beavers to remain in the wetlands. Other parts of the wetlands could still be allowed to dry up during drought periods, discouraging the establishment of fish that could prey on amphibian larvae. Desirable larger trees in the wetland area can be protected from beavers by wrapping aluminum, chicken wire, or steel screen around the trunks up to a height of 80 cm (Albert and Trimble 2000).

The industrious rodents can offer a range of benefits for California water supplies and habitats. But they’re still officially considered a pest.

On California’s central coast, a region that usually receives drenching rainfall or fog for most of the year, some forests are now as arid as a desert. Streams that once ran at least at a trickle through summer have vanished in the ongoing drought, and environmentalists and fishermen fear that local salmon will disappear if climate conditions don’t improve.

It could also use beavers, according to ecologists who say the near eradication of Castor canadensis from parts of the West in the 19th century has magnified the effects of California’s worst dry spell in history.

Beavers are a hated pest and a nuisance in the eyes of many landowners and developers, and the animals are regularly killed with depredation permits and by fur trappers. However, they are also a keystone species whose participation in the ecosystem creates benefits for almost all other flora and fauna, Dolman says. This is because of the way beavers’ hydro-engineering work affects the movement of water.

“Beavers aren’t actually creating more water, but they are altering how it flows, which creates benefits through the ecosystem,” says Michael Pollock, an ecosystems analyst and beaver specialist at the National Marine Fisheries Service Northwest Science Center.

By gnawing down trees and building dams, beavers create small reservoirs. What follows, scientists say, is a series of trickle-down benefits: The water that might otherwise have raced downstream to the sea, tearing apart creek gullies and washing away fish, instead gets holed up for months behind the jumbles of twigs and branches. In this cool, calm water, fish — like juvenile salmon — thrive.

Meanwhile, the water percolates slowly into the ground, recharging near-surface aquifers and keeping soils hydrated through the dry season. Entire streamside meadows, Dolman says, may remain green all summer if beavers are at work nearby. Downstream of a beaver pond, some of the percolated water may eventually resurface, helping keep small streams flowing and fish alive.

Dolman and his colleague Kate Lundquist, who are leading their organization’s “Bring Back the Beaver Campaign,” would like reintroduction of beavers from other regions to begin now as a measure for restoring salmon populations and building general drought resilience into the landscape.

In Oregon, something along these lines is happening. Here, a newly proposed Coho recovery plan would make it illegal to kill or harm beavers within the geographical range of the imperiled fish.

But in California, there is a problem: Government biologists aren’t entirely sold on the virtues of beavers. Kevin Shaffer, a fisheries biologist with the California Department of Fish and Wildlife, believes that beavers can have benefits for a watershed that is temporarily deprived of rainfall. Eventually, though, even beavers cannot cancel out the effects of long-term drought or climate change.

“As the drought gets worse, their ponds will dry up and the animals will just move somewhere else,” he says. “They won’t stay because there is no more water.”

Shaffer adds that introducing beavers into an environment that has been seriously stressed by drought may benefit nothing — not fish, not plant life and not the beavers themselves.

The California Department of Fish and Wildlife classifies beavers as a “nuisance” species. That’s because, Shaffer explains, the animals’ activity can have direct negative impacts on people. Dams can inundate properties, and falling trees could potentially land in roadways.

In spite of agency uncertainty, the benefits of beavers on a landscape are considered fact by scientists in California’s North Coast region. Sarah Beesley, a fisheries biologist with the Yurok Tribal Fisheries Program, has been running a habitat restoration effort on the lower Klamath River system, where a small beaver population currently resides. Her goal is to increase the presence of year-round water, especially in slow-moving wetlands, by building stick dams that closely mimic those built by beavers. In the future, her project hopes to reintroduce beavers themselves to streams that the animals don’t frequent.

In several stream systems in the region, says Beesley, the only places where salmon — especially endangered Coho — have survived after four years of below-average rainfall are beaver ponds.

“Wetland features, whether built by people or by beavers, are definitely what’s getting the salmon here through the drought,” says Beesley.

Beavers still live in the Klamath drainage system. They also occur, among other places, in the Central Valley, near the Mexican border and in parts of the Sierra Nevada.

However, there is ongoing debate about where beavers historically lived — a debate that could hinder progress in any reintroduction campaign.

Dolman and Lundquist contributed to a report published in 2013 in the journal California Fish and Game that revealed evidence of beavers having inhabited regions of coastal California where they don’t live today. The evidence included beaver remains and accounts from early explorers. Similar literature has been produced making the case that beavers lived throughout the Sierra Nevada. As a prelude to reintroducing the animals, they hope to establish as fact that beavers once played key ecological roles in many watersheds.

Beaver reintroduction has seen success in Washington, where the Methow Conservancy has identified beavers as a valuable tool for restoring damaged watersheds. The organization has participated in relocating more than 300 beavers into the headwaters of the Methow River system, which feeds the Columbia River.

Heide Andersen, stewardship director at the conservancy, believes the ongoing decline of salmon on the West Coast began partly as a result of losing beavers.

“Beavers impact almost every aspect of the watershed,” says Andersen. “They lower stream temperatures, retain sediment, create refuge for fish, and create groundwater percolation that reappears downstream later in the year. When beavers disappeared, streams became channelized, we lost our flows earlier in the summer, and temperatures went up.”

While rain is sorely needed throughout California, the absence of beaver infrastructure could make the landscape less able to rebound should a more generous hydrological period resume. Dolman explains that, without woody debris in the creek gullies to slow water down, the land has less opportunity to soak it up when rain does fall. The result is raging floods in the winter and, once summer comes, a watershed that rapidly goes dry again.

“Losing beavers is a double whammy for a watershed,” Dolman explains. “You get exacerbated flooding, erosion and sediment, and reduced groundwater recharge, in the winter. Then, in the summer, you have land that dries up faster because you didn’t get that winter recharge. We’ve created a landscape much less resilient to drought.”

Alastair Bland is a freelance writer based in San Francisco. He can be reached at allybland79@gmail.com or via Twitter at @allybland.

Alastair Bland is a freelance journalist in San Francisco, CA. He can be reached at allybland79@gmail.com or via Twitter.

Reprinted from News Deeply
News Deeply is an award-winning new media company dedicated to covering the world’s most important and underreported stories.